He takes classes on a weekly basis, involves himself in philanthropic organizations he’s passionate about and spends his free time relaxing through hobbies—one of his favorites being gardening.

With his life in a constant rhythm, it’s hard to believe that a simple rewind would paint another picture.

After aging out of the foster care system at 18, Zuñiga-Echeverria traveled to Austin in hopes of finding a steady job. Months of searching and couch surfing led him to a life on the streets, becoming yet another statistic in Austin’s rising population of homeless youth. While many in this position would feel their future becoming stagnant, he found an outlet for help.

That way out was LifeWorks, a non-profit organization that helps youth and families find their path to self-sufficiency through counseling, workforce opportunities as well as affordable housing.

“He was one of the first people I counseled through the street outreach program around the same time our affordable apartments, ‘The Works’ were being built, ” Laura Poskochil, director of apartment-based living for Lifeworks said. ” As soon as we started working together, I made sure he was first on the waitlist to live in one.”

While Francisco found LifeWorks, many continue to wander. A city known for its eco-friendly initiatives, booming technology industry and burnt orange university rarely gets associated with the growing problem of homelessness, particularly youth homelessness, that remains unresolved. According to the Ending Community Homelessness Coalition’s latest statistics, Austin’s homeless population increased 17 percent from 2015 to 2016. A large factor for this influx revolves around the issue of rising housing costs based on rapid population growth. Competing, though limited, real estate across the city raises its price tag, while wages for low-income workers remains the same.

“If you’re willing to work hard and do whatever it takes to make it, meaning a full-time, 40-hour-a-week entry-level job in Austin, you can’t even begin,” Scurry Miller, chief programs officer for Lifeworks said . “You’ll live in a tent, scrambling for a permanent home, no matter how much time and dedication you put in.”

That’s where The Works comes in. Painted in eye-popping red, green and yellow coloring, these apartments act as one of the few affordable housing options for the city. Built on the LifeWorks complex within East Austin, one, two or three-bedroom apartments average $350 to $375 a month. However, LifeWorks can only house 75 residents, and apartments with the same amenities just across the street average $1200 to $1250 per month.

Various advocacy efforts within the city strive to educate and tackle this pressing issue. One in particular, HousingWorks Austin, crafts policy focused on land-use strategies in order to find permanent housing and prevent homelessness. Executive Director Mandy De Mayo said they consider every sector of Austin, not just the working class, since backlash impacts all sides of the spectrum.

“A lot of people in our city live one paycheck away from homelessness, whether they are recent transplants looking for work or decade-old Austinites,” De Mayo said. “Twenty years ago, Austin was the most affordable city in Texas, and today that statement is quite the opposite.”

While advocacy helps educate the masses on this growing issue, the most promising solution remains creating viable areas of affordable housing.  Organizations like Lifeworks and HousingWorks may start to see their dreams—slowly but surely—transform into a reality, with Austin’s recently-attained grant to tackle youth homelessness, as well as Mayor Steve Adler’s public statement on what his focus is for 2017.

Today, Francisco Zuñiga-Echeverria lives in the LifeWorks complex. The education and workforce opportunities provided him with a steady income to pay rent each month, along with the ability to attend classes at Austin Community College and work on the LifeWorks Tenant’s Council. If one were to compare his present state to his past just a few years ago, this transformation would seem impossible.

Zuñiga-Echeverria’s story seems successful, but Poskochil and Miller both agree that the city has their work cut out for them. 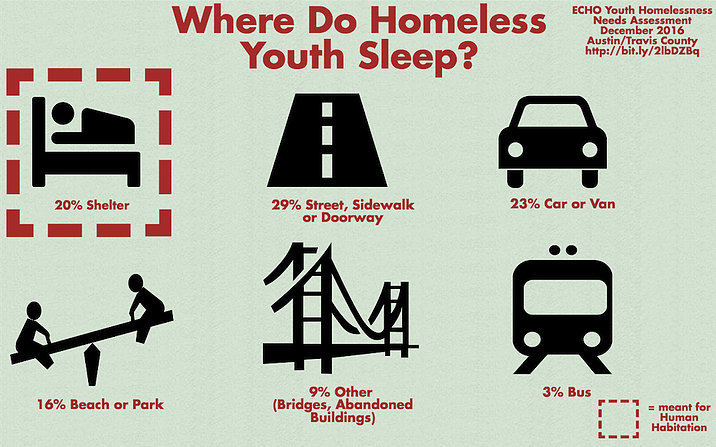 A snapshot summarizing information from 2016 across Austin and Travis County.